"Mission Accomplished!"" said Nikonians Team leader Kristina Nessl at the end of the final Nikonians participation at a major photo show for the year.
Nessl's Team greeted Nikon consumers ranging from the general public to working professionals during the Nikon Solutions Expo in London, England at the Olympia Conference Centre, Dec. 5-6. 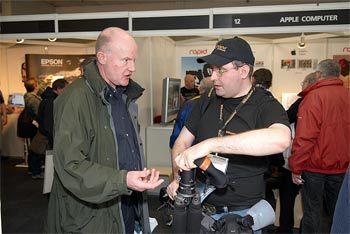 Nikonian Magnus Enbom (menbom) provides another shot of a Team member in action -- this time pointing his lens at Noel Holland (on the right) who showed up for the second and final day with two Gary Fong Lightspheres and his Gitzo Tripod and Markins ballhead. You may notice Noel has a clever way of carrying his Lightsphere.

The Team reports they had great success with their corporate booth partners Phase One in sharing not only space, but also ideas with their many visitors.
One of the often heard comments was from surprised visitors who thought Nikonians was only a USA site.
Of course. Kristina and the volunteer team let them know we're an international community, and presented everyone with informative brochures to help them check on the site, as well as join up.
The presence of ProShop-available items at the booth helped gain interest says Magnus, who reports if they had a stockpile on hand they might have been busy making sales.
The Nikon Solutions Expo in London capped a busy year for the community, which has actively participated at the PMA in Florida held this spring, the Photokina in Germany in late September, and the PhotoPlus Expo in New York City in November.

Details and more photos on the Photokina in Germany and the PhotoPlus Expo in New York City are available in the current edition of The Nikonian.