Nikonian Jason Odell known in the community for his work with Rick Walker in the popular Image Doctors podcast series, has issued a supplement to his eBook The Photographer's Guide to Capture NX™. 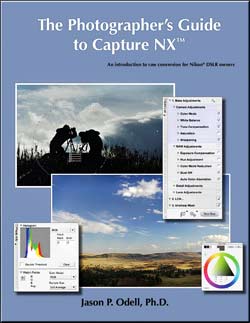 The supplement includes topics such as workflow improvements, fisheye lens corrections, polarizer effects, and dealing with dust on sensors (to name a few).

Details and ordering information are provided in his Press Release.

The Nikonians Image Doctors podcasts, hosted by Nikonians Rick Walker and Jason Odell, brings listeners up to date on the Nikonians community, Nikon equipment, and more. The Image Doctors shared their first impressions on Capture NX in a broadcast distributed in June of last year. You can download that broadcast by clicking Here.

For a guide to the entire collection of Nikonians podcasts, click here.