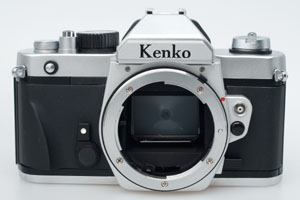 In an little advertised development, Kenko has announced that they will be selling a Nikon F-mount fully manual film SLR.

At first glance, the Kenko KF-2N could be mistaken for a smaller sibling of the now-discontinued Nikon FM10 film SLR. The KF-2N has many familiar features such as shutter speeds of Bulb and 1/4000th of a second, Center-Weighted Metering, F-mount (AI, AIS, AF and AF-D only) compatibility, sync speed of 1/125 and powered by two LR/SR-44 batteries. It slightly edges the FM-10 only in viewfinder relief, maximum shutter speed and a PC sync socket.