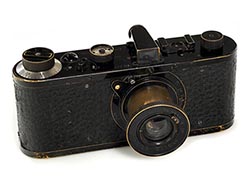 A black "pocket" Leica camera of the 1923 limited series 0 edition was sold for 336,000 Euros (US$492,300) at the WestLicht Photographica Auction in Vienna Austria, the highest price ever paid to date for an item of this type. The buyer is a private collector who acquired the camera with serial number 107, making it the most expensive Leica camera ever.

This camera is part of a set of 21 prototypes created by Leica to confirm market viability for "pocket" cameras. What further makes this camera unique, is that it was the first exported Leica camera, when sent to New York to the US Patent and Trademark Office for application.

At a previous WestLicht auction in May, a Daguerreotype by Susse Freres of France, built in 1839, fetched 588,613 Euros (US$862,400), which WestLicht said made it the world's most expensive camera.