Nikonians have been taking full advantage of the robust Nikon UK Solutions Expo schedule through November, meeting first in Manchester, then Bristol for the Road Shows, and now in London. 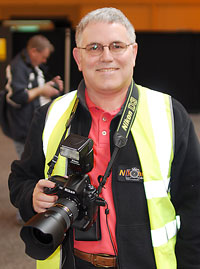 Nikonians Team member (and moderator of a number of our forums) Brian Tilley was the first to report in, following his day-long visit to the Bristol Solutions Expo Road Show on November 21. Brian's trip has resulted in an article which will be published in the next edition of The Nikonian in a couple of weeks. Brian, shown at right with a Nikon D3 he was happy to try out, says his time with the camera could be described in one word - "fantastic." "I've always been entirely happy with the performance of my D2Xs," he said, "...but the D3 simply blew it away in many areas." 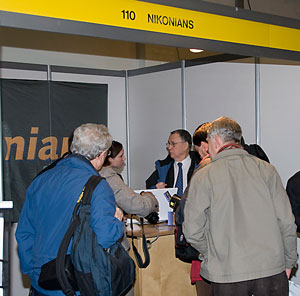 The London Expo began November 27 and still has a full day scheduled for the 28th at the Olympia Conference Centre. Our Team was ready to meet Nikonians at Booth 110, which had a steady stream of visitors. Team leader Joe Feser reports he had great support from Nikonians volunteers who helped hand out flyers and guide visitors to the Nikonians Booth. He counted approximately 250 visitors on day one, with 25 who identified as Nikonians members and two who signed up on the spot! A popular item at the booth turned out to be the Gary Fong Lightsphere-II®;, which is available through our PhotoProShop. Joe adds that he heard unofficial crowd estimates for the first day of the London Expo topping 1,800 and he expects an even larger turn-out at the Nikonians Booth for the second day. 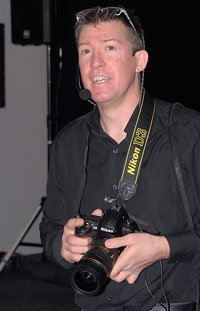 A popular feature at all of the Expos so far has been the seminars and demonstrations featuring award winning photographers. Nikon UK professional representative Gareth Jones, shown on the right, joined a distinguished list of industry experts hosting masterclasses and seminars. Brian Tilley reports that when he arrived for the Bristol Road Show the first thing he did was sign up for a Gareth Jones seminar. In an excerpt from Brian's soon to be published article on his trip he says that during one of the seminars (presented by Nikon UK Pro Business Development Manager John McDonald) he got some Nikon "insight" on the reasoning for providing the D3 in the new FX format.
"I got the impression that FX is seen simply as a means to an end," says Brian. "...not as the 'holy grail' that some pundits seem to view it. DX is certainly not dead, as evidenced by the statement that the D300 is now seen as the flagship DX pro camera, supplanting the D2X(s) and exceeding its performance in just about all areas."

Nikonians also visited the Nikon lens and camera booths, paying particular attention to the new Nikon D300. If handling the new gear was not enough, the Expo offered shooting opportunities in both Stage and Studio settings. 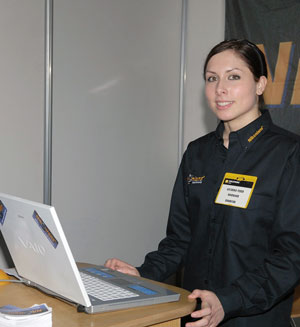 The Wednesday schedule will once again find Team Member Katarina Mintalova, at left with her laptop, ready to answer questions and greet Nikonians at Booth 110, and Joe says with her help and that of his volunteers (who have provided these images of the London Show) he hopes to be able to catch some time for a closer look at the many other attractions available at the Nikon Solutions Expo.