Saturday's activities at Photokina 2008 included a steady stream of visitors at the Nikonians booth in Cologne, Germany. The guests included Nikon representatives from all parts of the globe. 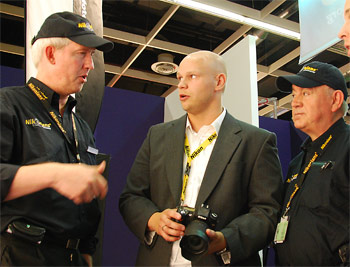 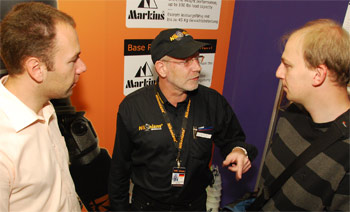 Nikonians administrator Gerold Brinkema (Asgard) described the workings of our new MAGICA camera support system to a pair of interested visitors. Gerold and his fellow Nikonians Team members have been sharing "stations" at the booth, taking turns on membership assistance and Photo Pro Shop sales. The Team ws assisted by a volunteer force of Nikonians, who helped steer Nikon users to the booth. The result has been a steady increase in memberships daily. 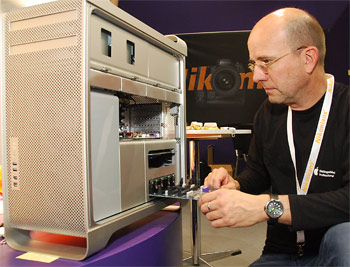 Only One day left---

If you have the chance to come by, we are raffling daily prizes, including a Markins Q3, Nikonians t-shirts, camera straps and more. Just do not forget your username! :)
If you bring your favorite shot on a USB stick, you also have the chance to get it printed on a large format photo printer.

Gary Fong (USA) will be on hand for demonstrations during the weekend. Stop by the Nikonians booth (Hall 2.1, E014) early to double check on his demonstrations schedule for the day.

Hope to see you there!
The Nikonians team
www.nikonians.org
Photokina, Hall 2.1, E014