Each new days brings a heavier volume of visitors to the Nikonians booth at Photokina 2008, in Cologne, Germany. Thanks to a steady stream of Nikonians volunteers, the Team has been able to take time to welcome distinguished visitors, sell some Photo Pro Shop favorites, and award daily prizes. 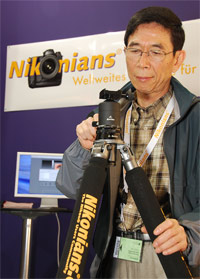 Nikonians co-founders J. Ramón Palacios and Bo Stahlbrandt welcomed Markins President Byung-Ik Mah to the booth for a meet and greet session that included a nod of approval for the unveiling of our new MAGICA camera support system. Mr. Mah, founder of the Markins Company whose products are solely distributed through Nikonians.org, was asked if he had to design the MAGICA from scratch would he make any changes. His reply came after a big smile. With no official announcements of a Markins line of tripod products in the near future, Mr. Mah says he has been developing some prototypes for the past two years.
The prototypes have been available only to a select few close business contacts, while he continues testing to meet his design goal. Just as with his now famous Markins ballheads, Mr. Mah intends to have the lightest weight yet sturdiest product on the market. It took more than five years for his ballhead designs to go from design to production, so don't start placing any orders for a Markins tripod yet. 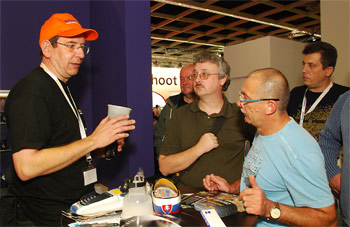 One of the hardest working volunteers at the Photokina has been Thomas Berg, shown here explaining the benefits of a Gary Fong Lightsphere to an interested visitor. He told us his positive approach during three day-long sessions on his feet came from experience. He's attended the Photokina shows since 1982 and as he explains it: "I've seen if from the visitor's side-- and I've always wanted a chance to be in the booth." 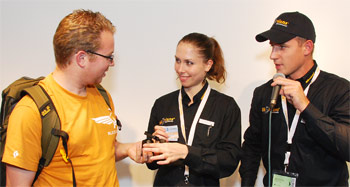 Nikonian Bram van de Kerkhof (Bamvdk), at left, is one of our recent daily drawing winners, earning a Markins Q3 Emille ballhead after registering at the our booth. The Nikonians prize award team is: Katarina Mintalova and Jürgen Plessing.
Free t-shirts will be handed out to a few lucky Nikonians from a limited daily supply throughout the week, and we also have a limited number of camera straps to give away to members. If you bring your favorite shot on a USB stick, you also have the chance to get it printed on a large format HP photo printer.

Hope to see you there!
The Nikonians team
Photokina, Hall 2.1, E014