Gary Fong, designer of the Fong Lightsphere series and other electronic flash accessories arrived at the Nikonians Photokina 2008 booth today to demonstrate his products and share tips and tricks. 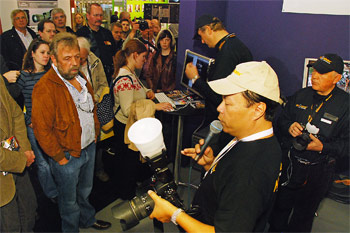 Gary explained (and gave examples) of the best methods for using his flash attachments to control lighting indoors and outdoors. In this photo he's explaining how to mount the Universal Lightsphere. Nikonians co-founder J. Ramón Palacios (jrp) is behind him using the Fong pop-up flash diffuser (The Puffer). 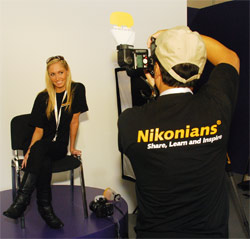 Before the demonstration session began, Gary discussed his connection with the Nikonians community, saying he not only enjoys selling to Nikonians, but also appreciates the feedback in our forums. "In many cases if something is not working right I can see it being discussed," he said. "It rarely comes down to a need to change the product itself. In most cases I just need to improve, or clarify the directions."
During his demonstration he credits his reading of the Nikonians forums for learning of a "bonus" Lightsphere feature he had not intentionally included. "It turns out that the white dome on the Lightsphere is being used as a very handy tool to adjust white balance." 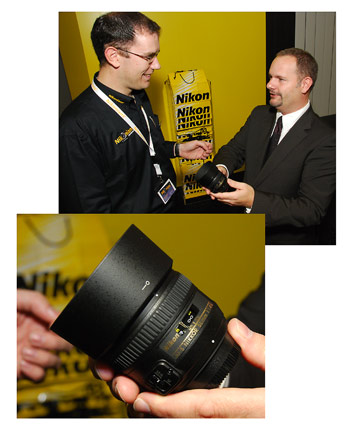 Upstairs in the same Photokina hall, Nikonian Team members were taking a close-up look at the new AF-S NIKKOR 50mm f/1.4G lens recenty introduced in time for the show.
The lens is scheduled to be available in December 2008 at an estimated selling price of $440 USD.
Nikon's Dirk Jasper (shown here discussing the new lens with Hendric Schneider, our Mass Media and Communications Director) said the small lens has been a popular item at the Nikon booth.
It is designed for full-frame use, but can quickly become a DX-shooter's favorite medium telephoto (at an effective 75mm range).
It's also been a much discussed topic among Nikonians, with some questioning the lack of Nikon's exclusive Nano Crystal Coat.
Jasper, a team leader in Nikon GMBH's Consumer Products Division, told us the Super Integrated Coatings (SIC) coating on this lens, which serves to cut down on lens flare and chromatic aberrations, was the right choice for this type of lens. "The Nano Coat is perfect for lenses that have large glass at the front or many elements -- like the wide angles, zooms and telephotos," he said. "But in this case you're talking about a fairly small prime lens with front and rear elements that are symmetrical to each other, and that's just a few of the technical factors in this design."
"The SIC is the right match for this lens." he said "Anything more would be like using a cannon to shoot a small bird."
Jasper added the Nano Coat technology is an expensive process that in this case was not required, with a net result of less costs in production as well as in selling prices.

If you have the chance to come by, we are raffling daily prizes, including a Markins Q3, Nikonians t-shirts, camera straps and more. Just do not forget your username! :)
If you bring your favorite shot on a USB stick, you also have the chance to get it printed on a large format photo printer.

Gary Fong (USA) will be on hand for demonstrations during the weekend. Stop by the Nikonians booth (Hall 2.1, E014) early to double check on his demonstrations schedule for the day.

Hope to see you there!
The Nikonians team
www.nikonians.org
Photokina, Hall 2.1, E014