Thanks to the usual leaks and some clever marketing, the unveiling of Nikon's newest, and most feature-packed (and expensive) digital single-lens-reflex (DSLR), the Nikon D3x left little to the imagination beyond an actual test drive. D3x launch events were set up around the world and in Switzerland our Nikonian team of Hendric Schneider (Hendric) and Holger Wahl (holger) were invited for see the new Nikon "monster" for themselves. In German, the one word they heard the most was "Hervorragend" (rough translation: somewhere between outstanding and awesome).... 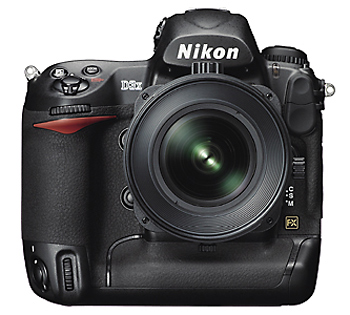 The D3x hits the photography world with Nikon's first 24.5-Megapixel resolution sensor, which now puts Nikon into the world of image quality previously owned by professionals shooting medium format cameras.
Hendric, our Mass Media and Communications Director, says the host for the Swiss launch ran through a 30 minute presentation for a group of less nearly thirty imaging and photography journalists and professionals tracing the evolution of the Nikon DSLR line.
Pascal Richard, Nikon Swiss Manager of NPS Nikon Professional Services Marketing, told his audience this was just the beginning of Nikon's entry in the medium format arena. 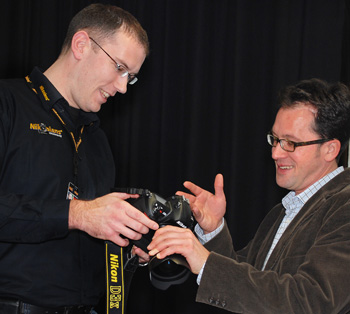 Pascal is shown here, handing a D3x with an AF-S NIKKOR 14-24mm f/2.8G ED lens attached to Hendric (on the left). "An interesting point Pascal made was the comparison from a year ago when the D3 was announced and now," said Hendric. "He showed photos of the 11th International Association of Athletics Federations (IAAF) World Athletics Championships in Osaka in 2007, and pointed out the many Canon Lenses. Then he showed similar pictures from the 2008 Olympics in Bejing, now with many more black Nikon lenses. He said that's what Nikon is shooting for- to become number one." 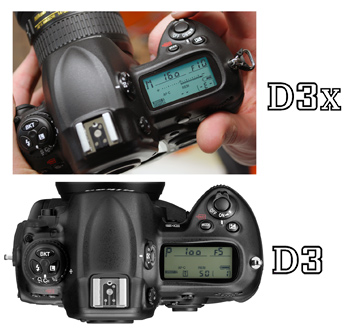 The professionals on hand with experience handling the D3 were quick to point out that the ergonomics of the new model were practically identical. Both physical handling characteristics and placement of hardware mirrored the D3, making the transition to the D3x an easy "step-up." In a top-side comparison, when you can't see the little "x" on the front of the camera, you would be severely challenged to say which model you had in your hand. The key differences and imrpovements are all inside. 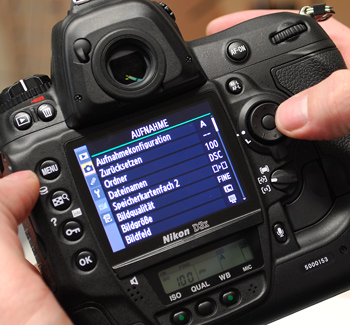 In this photo of the Shooting Menu (in German), we see one of the 15 languages supported by the Nikon D3x. It supports: Chinese (Simplified and Traditional), Dutch, English, Finnish, French, German, Italian, Japanese, Korean, Polish, Portuguese, Russian, Spanish and Swedish. The D3x has the same rugged shell surrounding a magnesium alloy frame used by the D3 for protection from moisture, dust and shocks.
The 3.0-inch super density LCD monitor provides a 920,000-dot screen viewable at wide angles up to 170 degrees. 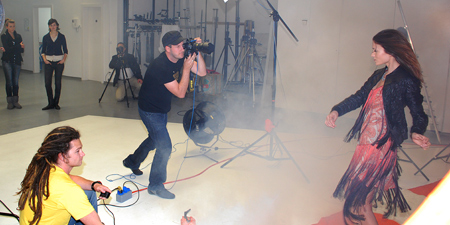 Following his presentation, Pascal Richard invited his guests to put the D3x to the test, with a live studio shoot and attractive model ready to go. His offer was taken up by many, including our own Hendric Schnieder and Holger Wahl, news editor of the German edition News Blogs. Among those testing the camera in studio conditions was Swiss fashion photographer Christian Ammann (photo above). Hendric tells us: "He was very impressed with how easy it was to handle. He had never handled the D3x but is very familiar with the D3 and he was pleased that the menu has the same structure." 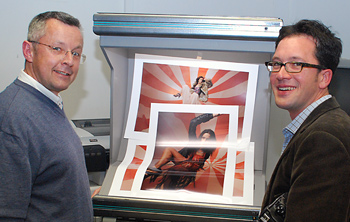 Holger's shooting session was with the D3x and an AF-S NIKKOR 24-70mm f/2.8G ED lens. He's shown here (on left) looking at some of the work produced by fellow guests with his host, Pascal.
The studio environment helped emphasize the Nikon D3x strength -- High resolution images perfect for use by Nikon's target market: "high fashion, commercial advertising and fine art." That high resolution work will best be utilized by the pros who are already equipped to handle the massive post-processing requirements of files exceeding 138 MB. 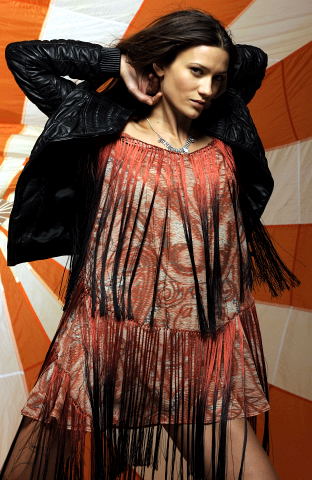 The D3x will be available next month at a cost of $8,000 USD (manufacturer's suggested retail price). With a tough world-wide economy situation many Nikonians who can't afford the new Nikon DSLR flagship may be wondering why the unveiling of this 24 megapixel full-frame beast is of importance to them.

The benefit comes in a downhill pattern. The D3x launch was preceded by welcome price drops for the D3, which can now be found at half the price of the D3x. The technological steps used to perfect the D3x will sooner than later be passed on to future Nikon's in the "prosumer" range, and again at lower costs. The D90 currently on the market is a good example.
So, if you can't afford it, join the crowd -- but take heart in the fact that your Nikon world has just been improved.

As a parting shot, here's Holger's image of the model in front of the parachute.
His exposure time was 1/250 sec at an aperture of f/11 using ISO 100.