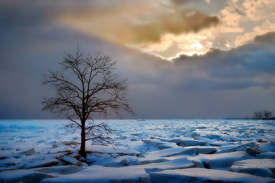 Silver member Joe Iannandrea (skorj) of Fort Erie, Canada is our Grand Prize winner with his image entitled "Cold Wait."
Joe captured his winning entry with his Nikon D80 in the Manual exposure mode, shooting at a shutter speed of 1/320 second. He used his Tamron SP AF 20-40mm F/2.7-3.5 Aspherical-IF lens at f/9.
Joe's image has earned him a Spyder3Print software and hardware package from Datacolor and a Glass Taxi convertible backpack/ shoulder bag from Think Tank Photo. Joe will also receive a one-year Platinum level membership and Certificate of Photographic Achievement from our Nikonians co-founders. 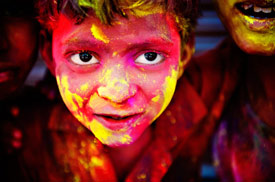 Honorable Mention goes to Silver member Poras Chaudhary (kaipu) from India, who submitted his image "Color Me Red." He used his newly purchased Nikon D3 and a Nikkor AF-S 24-70mm f/2.8 G ED lens. He had the lens wide open at f/2.8, allowing him to expose at 1/640 sec with ISO 400.
His picture was taken on the colorful festival of Holi, which is celebrated on the day after the full moon in early March every year. It is also called the Festival of Colors. On this day people throw colors at each other.
As an Honorable Mention Finalist he will receive a one-year Gold level membership and Certificate of Photographic Achievement from our Nikonians co-founders. 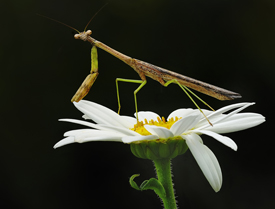 Honorable Mention also goes to Gold member Thomas Spain (Countryboy), from Memphis, Tennessee, USA. His "Praying Mantis” image was taken in his backyard. with his Nikon D2X. He used natural light and a cable release. His camera was tripod mounted and the mirror was locked up. Thomas also used a white matte board reflector and a suns shade. He used his AF Micro-NIKKOR 200mm f/4D IF-ED at f/4.3, 1/13 sec at an ISO of 100.
He was spot-Metering for the shot and used shutter speed priority for his autoexposure setting.
As an Honorable Mention Finalist he will have his Gold level membership extended for another year and he will receive a Certificate of Photographic Achievement from our Nikonians co-founders.

The Best of Nikonians 2009 Images Photo Contest has already begun.
Check the contest guidelines and get in on the action today!