Congratulations to Jerrold Matthews (jwmatthews) from Alaska, USA for his winning image of a volcanic eruption in the fourth week of our Welcoming Photo Contest II 2009. 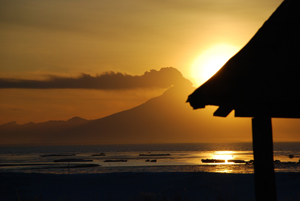 Jerrold took his photo in early April of this year, shooting from a unique vantage point across the Cook Inlet in Alaska.
The 10,200-foot volcano spewed ash up to 60,000 feet when it started erupting in March. It is located approximately 100 miles southwest of Anchorage, Alaska.
Jerrold was shooting almost two weeks later from Kasilof, Alaska (on the east side of the Cook Inlet on the Kenai Peninsula). He was shooting towards the west, across the inlet, as the smoldering volcano was backlit by the setting sun, and he came up with this image which he calls "Mt. Redoubt Sunset."
He had his Nikon D80 tripod mounted, and he used his AF-S DX Zoom-NIKKOR 18-135mm f/3.5-5.6G IF-ED lens at the full 135mm to pull in the volcano which is over 60 miles from his shooting location. The lens used an aperture of f/10 and his camera shutter speed was 1/250 second. His ISO was set to 160 and his White Balance was set to Auto.

Week Five of the contest has begun.
This is the final week. If you register between now and May 5, no matter on which level (from Basic to Platinum), you can participate in this contest. Complete details and a guide on how to prepare your entries for our Welcoming Photo Contest II are available here.