Nikon Photo Unit Beats Estimates for First Half of 2009

Nikon's photo unit appears to be going against the tide of the global economic downturn. Despite being labelled as an "underperforming" share following the pessimistic August forecast, Nikon's latest sales figures out are reportedly "better than our estimate for the first half and the second half [of 2009]," according to a recent interview with Imaging Unit president Makoto Kimura. (via Bloomberg News)

Posted by flashdeadline at 7:57 AM It was taken with a Nikon D700, ISO 200, f/16, 1/500 sec, Nikon 200-400mm @ 400mm. Bill tells us he shot this image of a coyote searching for prey in Gibbon Meadow, Yellowstone National Park. Bill is from Washington, USA.
Bill's prize for making it into the semi-finals is a Speed Freak Beltpack from Think Tank Photo.

The contest, open to all Silver, Gold and Platinum Nikonians Members, results in monthly winners being announced, with each moving on to the finals at the end of the year.
Our September segment is currently under way (and the deadline is Wednesday, Sept. 30). Please remember that the main subject for this month must be a "Celebration" scene. The longest size of the photograph must be between 900 and 1024 pixels
October's theme is "People" — followed by "Night Sky" in November and "My Best Shot" in December.

For detailed information on entering, check our contest rules.

Posted by flashdeadline at 2:32 AM

A D3 with video in our future:

• Mastering the D700, by Darrell Young and James Johnson.

All four NikoniansPress/Rocky Nook Books books include a special Nikonians 50%-off voucher discount for a one year Gold Membership in the Nikonians community. This will save you $37.50 USD.

Posted by rayvaldovinos at 7:40 AM

Newest Book on the Nikon D90 now in stock

Mastering the Nikon D90, by Nikonian Darrell Young has been printed and has started shipping. This is our fourth in a series of books in the joint venture between NikoniansPress and publisher Rocky Nook.

All four books in the NikoniansPress/Rocky Nook collection include a special Nikonians 50%-off voucher discount for a one year Gold Membership in the Nikonians community. This will save you $37.50 USD. The new book includes images submitted by members of the Nikonians community with their D90's at the start of each chapter.
Darrell (who most of us know better by his Nikonians username as Digital Darrell) has concentrated on filling in the information gaps you often find in user's manuals.

Posted by flashdeadline at 7:12 AM Cam (short for Camilla) is a Silver member with experience using her D50, D80 (and now D90) cameras in shooting wildlife and birds. Cam's winning entry is entitled Bush Tit in Flight .

Cam will be receiving a Photoshop Bundle by Topaz Labs (currently valued at $149.99 USD) for her winning entry.

Our contest continues and a new winner will be announced once every week for the next two weeks. Check the Welcoming Photo Contest - Phase IV announcement for details.

About our Phase IV Contest sponsor:
Topaz Labs, makers of popular Photoshop Plug-Ins such as Adjust, Vivacity and DeJPEG are currently offering a very generous 25% discount for all contributing Nikonians at the Silver, Gold and Platinum levels. Check your Nikonians Rewards Page for details.

Posted by flashdeadline at 12:40 AM

It's the 100th episode of The Image Doctors!  Jason & Rick celebrate with an exclusive interview with Nikon Legend Joe McNally!

For the MP3 version of this podcast (audio only) click here (18MB).

This week, the Nikonians Image Doctors, Jason Odell and Rick Walker, will be posting a milestone episode — the Magic Number 100 — which is a prized goal in all forms of broadcasting.

Episode 100 will be ready for download on September 17.
The podcast team premiered Episode 1 in December 2005 from their "mountain stronghold, somewere in Colorado."
To give you an idea of the state of affairs in the Nikon enthusiasts world, the hot topic at the time was a the new Nikon digital single lens reflex camera that had recently been announced, the Nikon D200.

Episode 100 will feature interesting guest appearances and it is highlighted by a special interview with Joe McNally. McNally has been recognized as "perhaps the most versatile photojournalist working today" by American Photo Magazine.

Rick Walker shared with us a sneak peek at McNally's segment:
"In this episode, Joe discusses his initial entry into the world of professional photography, his varied experiences shooting on location, and his approach to lighting a scene. As an acknowledged expert in that field (and one heck of a photographer), Joe provides great advice for those interested in the creative use of flash and how to ease into it. He also gives his thoughts on the rapidly changing state of photography, especially for those considering it as a career. Joe was a wonderful guest for us to have on the show, and we hope you enjoy it."

Posted by flashdeadline at 3:53 PM

- Where are New CoolPix cameras in stock?

- In This week's News Flash we will be sharing the latest news from Nikon and a heads up on
the 100th episiode coming from the Nikonians Image Doctors.

- News from The Photo Pro Shop

Posted by rayvaldovinos at 9:04 PM

Congratulations to Steve Harrington (sevenball), of Ontario, Canada for winning the first week of our New Members Welcoming Photo Contest Phase IV with a soft-focus macro shot of flower petals. 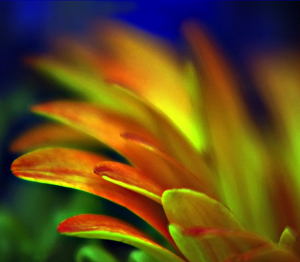 Our contest continues and a new winner will be announced once every week for the next three weeks.

Topaz Labs, makers of popular Photoshop Plug-Ins such as Adjust, Vivacity and DeJPEG are currently offering a very generous 25% discount for all contributing Nikonians at the Silver, Gold and Platinum levels. Check your Nikonians Rewards Page for details.

If you are a new member you too can win!

If you registered between August 30th and September 26th, no matter at which level (from Basic to Platinum), you can participate in this contest.
Each week we will select a winner.
The week two judging concludes this weekend and the announcement will be made after Sepember 14.
The last one in this series will be announced on September 28, 2009.
Complete details and a guide on how to prepare your entries are available in our New Members Welcoming Photo Contest Phase IV announcement.

Posted by flashdeadline at 7:40 PM

50-million Nikkors have been produced

The recently celebrated 75th Anniversary of the Nikkor lens brand can now add another huge number to their impressive list of milestones.
Nikon Corporation President Michio Kariya has announced that as of August 2009 total production of NIKKOR lenses has reached fifty million.

Take a peek into Nikkor history Nikon has posted the background story behind "The first f/1.4 lens for use with the Nikon F Series" which takes a prominent position in Nikkor lens history.
The Nikkor-S Auto 5.8cm f/1.4
By Kouichi Ohshita
The author includes sample photos and a quick review of the lens, which was introduced in 1960 and had a production run of two years.

Posted by flashdeadline at 6:00 PM

The 2010 Contest designed to showcase excellence in photography through microscopes has begun, and this year's prize list includes a $3,000 USD shopping spree towards the purchase of Nikon equipment.

The deadline for entries in the 2010 Nikon's Small World Competition is April 30, 2010.
Photomicrographs must be taken using a light microscope, such as one of the Nikon series of compound or stereoscopic microscopes. The use of Nikon equipment is not required. Complete contest entry rules and the online entry form are available at the Nikon Small World Homepage (along with great examples of the winning entries from previous competition).
According to the site:
Winners will receive one of 20 prizes, sorted according to rank in the competition. First prize is $3,000 toward the purchase of Nikon equipment. In addition, the winner is invited to attend an awards presentation ceremony in New York City as Nikon’s special guest.
Nikon’s Small World was founded in 1974 as a means to recognize excellence in photography through the microscope. The competition’s reputation has grown over the years and is regarded as the leading forum for recognizing beauty and complexity as seen through the microscope

Posted by flashdeadline at 4:55 PM

Thank you for joining me.
Your Nikonians podcaster Ray Valdovinos

Any kind of feedback would be appreciated.

Posted by rayvaldovinos at 2:32 PM | Comments

Rick and Jason interview Adobe "Evangelist" Julieanne Kost, who gives tons of advice on how to use Photoshop and Lightroom.

The improved optic now sports several key attributes that makes it very appealing to shutterbugs; the fast aperture, a Built-In-Motor (BIM - similar to Nikon's Silent Wave coreless drives), the Di rating making this an attractive 25-75mm equivalent for less than full-frame sensor cameras, and now the image-stabilization. Upgraders should note; the lens grew a little bit as one would expect with the addition of the VC elements - the front filter is now 72mm versus the previous 67mm; and gained a little bit of weight and bulk.

Tamron indicates the new lens will go on sale in Japan on 15-Sept-2009. Nikonians should look for it to appear shortly after that in their respective sales regions across the globe.At time of publication, no MSRP was quoted by the manufacturer.

Berger Brothers, the Nikonians retail partner, is pleased to announce that all community members (Silver and higher) will receive a 10% discount on all Gitzo and Manfrotto plus free shipping! To take advantage of this and many other savings, check out the Nikonians Rewards page.

And you can confer with Berger Brothers staff at any time on their dedicated forum, for questions about tripods or any other camera gear.

Be sure to check the Rewards Page weekly as our partners update their offers frequently. Most of our partner incentives will often equal or exceed the membership fee after just the purchase, so it pays to be a Contributing Nikonian!