50-million Nikkors have been produced

The recently celebrated 75th Anniversary of the Nikkor lens brand can now add another huge number to their impressive list of milestones.
Nikon Corporation President Michio Kariya has announced that as of August 2009 total production of NIKKOR lenses has reached fifty million.

Take a peek into Nikkor history 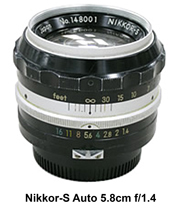 Nikon has posted the background story behind "The first f/1.4 lens for use with the Nikon F Series" which takes a prominent position in Nikkor lens history.
The Nikkor-S Auto 5.8cm f/1.4
By Kouichi Ohshita
The author includes sample photos and a quick review of the lens, which was introduced in 1960 and had a production run of two years.