This week, the Nikonians Image Doctors, Jason Odell and Rick Walker, will be posting a milestone episode — the Magic Number 100 — which is a prized goal in all forms of broadcasting.

Episode 100 will be ready for download on September 17.
The podcast team premiered Episode 1 in December 2005 from their "mountain stronghold, somewere in Colorado."
To give you an idea of the state of affairs in the Nikon enthusiasts world, the hot topic at the time was a the new Nikon digital single lens reflex camera that had recently been announced, the Nikon D200.

Episode 100 will feature interesting guest appearances and it is highlighted by a special interview with Joe McNally. 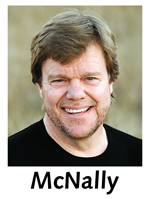 McNally has been recognized as "perhaps the most versatile photojournalist working today" by American Photo Magazine.

Rick Walker shared with us a sneak peek at McNally's segment:
"In this episode, Joe discusses his initial entry into the world of professional photography, his varied experiences shooting on location, and his approach to lighting a scene. As an acknowledged expert in that field (and one heck of a photographer), Joe provides great advice for those interested in the creative use of flash and how to ease into it. He also gives his thoughts on the rapidly changing state of photography, especially for those considering it as a career. Joe was a wonderful guest for us to have on the show, and we hope you enjoy it."