Congratulations to Silver Nikonian Tammy McBrien (duffergirl) of Ontario, Canada for winning the September segment of our Best of Nikonians - 2009 Images Photo Contest. 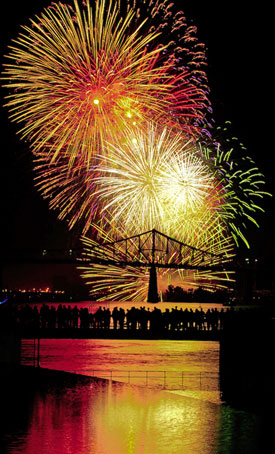 Tammy shares with us her behind the scenes preparations:
It was late in the evening. I managed to get a tripod set up which was difficult as there were so many people in the crowd. I was initially disappointed that I could not get closer to the fireworks but once I started shooting I realized that I could capture the crowd watching the fireworks — and I really liked that depth and the ability to capture the entire event from a distance. It was a lovely clear evening. The fireworks display in this portion of the competition was put on by South Africa.
I shoot with my D300 and my 18-200 lens aperture was f/13. The ISO was set to 200 and the focal length of the lens was at 56 mm. The exposure lasted for 1.3 seconds. My camera was mounted on a 25 year old, creaky, aluminum tripod. The head was propped up straight with a wine cork. I have since replaced it with a snappy carbon fiber model.

Tammy's concern about that crowd in the foreground turns out to be a big factor in her winning formula. The contest judges praised her ability to capture the crowd as well as the fireworks display.

As her prize, Tammy will receive from Think Tank Photo a Speed Racer™ Camera Beltpack.

Join in on the action!
For our Silver, Gold and Platinum members, all you need to do is have a quick look at our Rules and Guidelines and make sure you know we only have three months of eligibility left (with one ending this week).
Our October contest segment is currently under way (last entry date is October 31.) The main subject for October is a "People" scene. The longest size of the photograph must be between 900 and 1024 pixels. If you want to check out some great images already in the running for top honors in the "People" theme, check the October entries already entered in the competition.
Looking ahead for your final two shots at earning the Best of Nikonians - 2009 Images Photo Contest crown — the November segment theme is "Night Sky" and the final segment in December will be your opportunity to show us "My Best Shot."