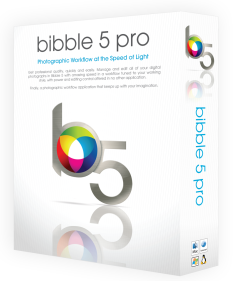 It has a revised user interface, higher speed and additional tools for the selective editing of RAW files, and runs on both Win and Mac systems.

The "Pro" version costs $199.95, the price for a "Lite" version (available in the "early part of 2010") and a breakdown of the (reduced) functionalities in the "Lite" version have yet to be spelled out.

More information and links for downloading a free trial version or buying Bibble 5 Pro, can be found at the Bibble webpages.