Congratulations to Silver Nikonian Ryan Pendleton (Pichead) of Missouri, USA for taking top honors as the overall winner of The Best of Nikonians - 2009 Image Contest. 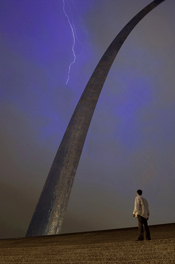 He first displayed his image "St. Louis Storm" in our November segment.
Ryan used his Nikon D700 and Nikkor AF-S 24-70mm f/2.8 G ED lens for an extended 25 second exposure at f/2.8.
That's Ryan standing in the foreground. He had his D700 tripod mounted and triggered it with his remote.
In his photo notes he calmly states "Did not get struck."
As the winner, he will receive a Think Tank Photo - Airport Security™ V 2.0 backpack, and an extension of his membership at the Gold level for three years.

Honorable Mention went to (by sheer coincidence) to our first and last segment finalists during the 2009 contest. 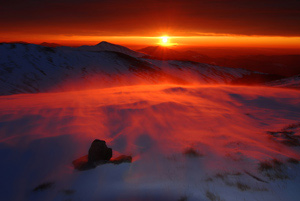 Octavian Radu Topai (Tavi) of Timisoara, Romania, was our first finalist in the Best of Nikonians – 2009 Images Contest.
His segment focused on the theme "Hot and Cold" and he won with "Story of a Snowflake."

He used his Nikon D200 with a Tokina AF 12-24mm f/4 AT-X 124AF Pro DX lens zoomed to about 19 mm, aperture f/9, exposure time 1/30 sec at ISO 100.
Octavian will receive Think Tank Photo's StreetWalker® backpack as his prize, along with an extension on his membership at Gold level for one year. 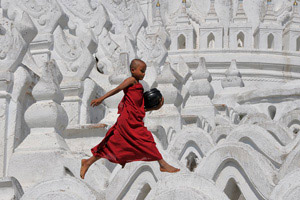 Silver member Jody L. Dutro (Jodys98Torch ) earned Honorable Mention with her image titled “Play Time.” It shows a novice monk having a little fun at the Hsinbyume Pagoda in Mingun, Burma. Jody submitted this photo as her entry in the December segment of the contest. She used a Nikon D300 with her AF-S DX VR Zoom-NIKKOR 18-200mm f/3.5-5.6G IF-ED lens at 65mm f/14, 1/800 sec., ISO 200, handheld, no filters.
She tells us:
We had a small group of novice monks we 'borrowed' from the monastery for our photo shoot at this temple. When our guide asked them to climb around and leap from point to point, this young monk was the one I concentrated on shooting because of his graceful and fluid motion. I liked the way he had that slight smile the whole time, like he was enjoying himself, and was probably amused at us goofy photographers clicking away.
As her prize, Jody receives a Datacolor - Spyder3Pro Hardware/Software package and her membership will be upgraded to Gold and extended for one year.

The 2010 Contest has begun!
The Best of Nikonians 2010 Image Contest started in February, with the first theme centered on HDR (High Dynamic Range) photos. HDR is a unique aspect of the digital darkroom age, allowing you to combine the best exposure elements from multiple exposures into one perfect end-product.

For more information on HDR photography discussed by Nikonians, check our Photomatix & Other HDR software forum.