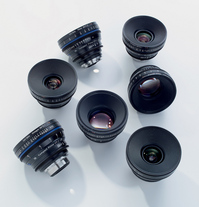 The Compact Prime CP.2 lenses introduce interchangeable mounts that allow the lenses to be used with a wide range of cameras, from traditional cine to HDSLR systems. Available with three different mounts – PL, EF and F – this new family of Zeiss lenses enables cinematographers to be completely free in their choice of camera systems while ensuring a high consistency of images.

The iris opening consists of 14 high-precision blades, which stay consistently round and symmetrical over the entire T-stop range.

The lenses cover a full-frame 24 x 36 image format without vignetting. They will be based around a common aperture of T2.1 for the standard set.

About T-Stops:   In case you are new to cinematography with your Nikon single-lens reflex, the motion picture industry prefers to use T-stop references for the lens apertures instead of f-stops. The "T" stands for the actual transmission value of the lens at a particular aperture. T-Stops are similar to f-stops, but they are tested and matched to a fine degree, ensuring that a T-stop on one lens is identical in light transmission properties to the same number on any other lens. A good comparison would be to think of an f-stop as a very good wristwatch telling accurate time. The T-stop would be equivalent to a chronograph, which serves the same purpose but to a more precise degree.

According to Zeiss, the new lenses will be available from June 2010, prices have not been announced yet.

Get more at the homepage of Zeiss.