Congratulations to the winners of our Nikonians 10th Anniversary Photo Contest. The Grand Prize winner not only takes top honors, he also manages to be the subject of one of the Honorable Mention images. 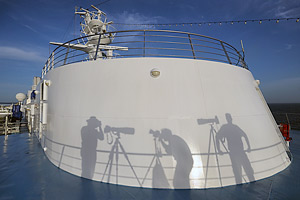 Here's his description of the shooting details:
"We were all part of the Nikonians Academy inaugural Ultimate Travel Workshop in the Caribbean led by Michael Mariant. The shadow on the left is me taking the photo. Just to the right of me in the photo is my MAGICA from the Nikonians' Photo Pro Shop (modified with a Wimberly Head) holding up my D3-500mm f/4 combo. I was getting ready to shoot the sunset...and hence the low sun angle casting the shadow.
The middle shadow is David Mathre (david_mathre). On the very right is Albert Esschendal (alberte) ...both die hard Nikonians.
Dave and I each think that we suggested the three of us turn around.
The great thing about shooting with guys like Albert and Dave (and other Nikonians) is that we help each other with finding possible shots. We laugh together, we learn from each other and we, of course, get inspired by one another.
The lesson here is to try to be aware of your total environment as you concentrate on the subject at hand. More often than one would expect, I have simply turned around and found a visual surprise!" 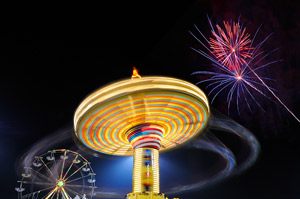 Jeff subtitled his winning entry: "The Nikonians community is a carnival of coolness!" 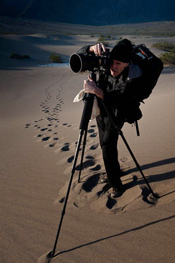 Prizes:
The Grand Prize for Richard Hulbert will be will be an exclusive "One-on-One" workshop with an International award winning photographer Pascal Baetens in Brussels, including air ticket and hotel accommodations. He will also receive a Plaber Case HPRC 2780W and Foolography Wireless GPS Bundle.