Congratulations to the winners of our fourth and fifth week in the Nikonians New Members Welcoming Photo Contest Phase VI.
Week Four honors go to a new member from the Netherlands, and Week Five's winner comes from Brazil, and posted shots taken in Scotland. 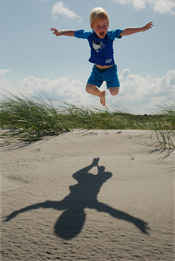 Our flying boy shot is submitted by Silver Member Maurits Obbema (Maupey) from the Netherlands.

He tells us the 4th week winning shot was made on one of the Dutch islands and confirms: "It's my son trying to fly."

Maurits has been shooting digital for a long time, first with a COOLPIX and now with his D80. 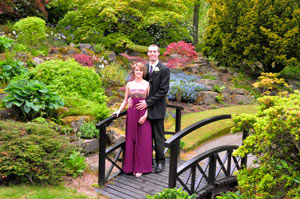 Our 5th Week winner is Silver Member Eric Emerson (eemerson) from Brazil. His image is titled "High School Sweethearts -2009" and it was taken in Scotland.
Eric tell us:
"Hey - Here is a picture of a young couple getting ready to go to their Junior-Senior prom in May 2009. They were juniors then. They have been dating since the 9th grade, they are seniors now and are getting ready for the prom again. This location is called Johnston Gardens in Aberdeen, Scotland. It's beautiful, tranquil little park tucked away in the city. Springtime here is fantastic!! I liked this picture because of all the different colors in the background, in addition the various tones of green. I like how they and the bridge are in the foreground and the plants provide such a vivid backdrop." 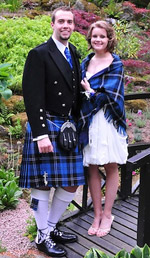 <-- The shooting location in Scotland may be hard to guess at first glance and if you need a better visual clue on that location, check out his shot from this year's prom, with the young man now wearing the traditional Scottish kilt.

Both of our winners earned a Topaz Photo Shop Plug-in Bundle, courtesy of our sponsor Topaz Labs.