ACDSee Pro 3 for Mac is coming

ACDsee has announced the release of ACDSee Pro Photo Manager 3 in the Mac version at Photokina 2010. 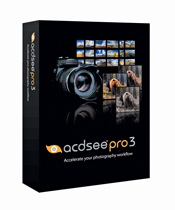 The beta release is scheduled for Fall 2010. The final release will come out early 2011.
They have also debuted the newest version, ACDSee Pro Photo Manager 4.

The new version 4 includes Map sorting (Geodata will be stored in the picture and you can also simply click on the map and all pictures taken in this location will be displayed).

It will also improve processing for all files types including: RWA, DNG, JPEG, TIFF.
New tools include vignette and achromatic correction.
More features can be found at the ACDSee webpage.