Beta testing of ACD Systems International's ACDSee™ Pro Photo Manager for Mac is heading into its final phase and introduces professional photographers to one of the software's most robust features: non-destructive editing.

Beta 1.4 downloads of ACDSee Pro for Mac, which gives photographers a faster all-in-one photography workflow system, are now available at www.acdsee.com/proformac. To date, more than 10,000 Mac users have participated in the beta program and have offered feedback in 153 forum topics to ACD Systems developers.
The final version is anticipated for release in early 2011. 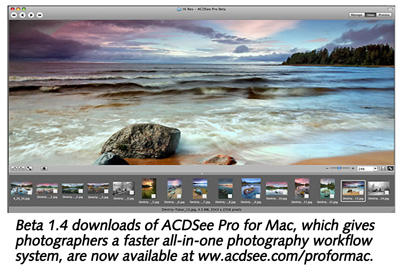 "This final beta phase is an opportunity for photographers to test the features that will make ACDSee Pro for Mac a powerful workflow tool, particularly the non-destructive editing capability," said Tarjin Rahman, product manager for ACD Systems. "Testers will be able to edit images without needing to save new files, which is a huge time-saver."

Other notable additions to the beta 1.4 version include:
• An improved graphical user interface for Process mode.
• The ability to easily copy and paste processing settings from one image to another.
• Metadata is compliant with the Metadata Working Group (MWG) and supports IPTC Core, Extended and IIM.
• Support for XMP sidecar files
• A Custom Metadata pane allows for presenting a specific set of data that is most important to the user.

Between the beta 1.4 test period and the final release date in early 2011, Simon Tipler, project manager for ACD Systems, said the company's developers will be implementing user feedback, adjusting features and performance to streamline the workflow process, and performing quality checks.

"We know photographers who use Mac systems are eagerly anticipating Pro for Mac because they have been integral to its development," said Rahman. "They will be very pleased when they see the final product."