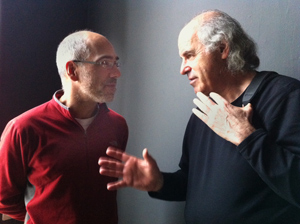 That's Rick on the right (on the first day), discussing photo techniques with Pascal.

Rick has has been learning the use of perspective and relative perspective in people photography as well as practicing the techniques for establishing distance between photographer and model (and how you can enter into the personal bubble to get more emotional portraits).

Also discussed was placement of the model in best frame composition to allow for strongest communication between subject and viewer.

A small group of four students in the first workshop Rick is taking with Pascal makes learning highly effective. Two models are available to the photographers.

Check our News Blog for Richard's description of the shooting details (including the names of our shadowy Nikonians Amigos).