Location, location, location. That's one key to for success when you plan on opening a new business, and it also applies to wildlife photography. Once you know the best location to capture outstanding and rare images of wildlife, you share it with your friends in the Nikonians community and before you know it, you have a Nikonians mini-event.

I live near the Mississippi river where each winter we have a large influx of bald eagles that gather at the dams to take advantage of the open (unfrozen) fishing water below each dam. We are lucky to be close to Lock and Dam 14 (near Le Claire, Iowa) that just happens to have the best waterside access of all of the upper Mississippi river dams. 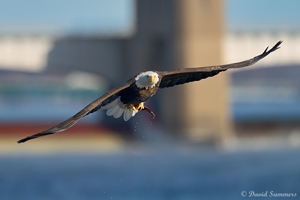 Some of the other dams may have more eagles but you are restricted to a small viewing platform looking over the locks making it impossible to get images of the eagles fishing.

At L&D 14 there is a small island with a public park between the shore and the dam. The Corps of Engineers has a maintenance lock between the shore and the island. This creates a nice little cove with a walkway right along the water’s edge. The island has a couple of big trees that the eagles like and just behind the walkway and parking lot is a nice stand of trees. Part of that stand is a refuge area where a large number of eagles roost.

The eagles will fly directly over our heads when going to and from the dam. Many eagles will also fish in the little cove just in front of our shooting area. This is a unique opportunity to see and photograph eagles as they catch fish.

Of course, the place has become quite popular over the last few years. There can be a couple hundred photographers there during the weekends. The weekdays are much less crowded but if the weather is good there will be some photographers around. 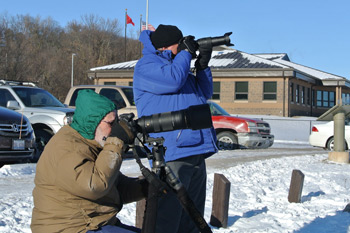 We have a handful of Nikonians that shoot eagles here regularly most notably Dave Engeler (edf123), Scott Sternburg (Bumb57) and myself. We have had quite a few out of town Nikonians travel out to shoot the eagles.

This year both John Roach (jdroach) and Gary Pool (gpool) happened to make plans to come to L&D 14 during the same week after seeing some shots that I had posted from the previous weekend.

The weather forecast was good that week with frigid temps and sunshine predicted. The eagles are active in the super cold weather so Scott and I made plans to meet John and Gary at noon on Thursday. 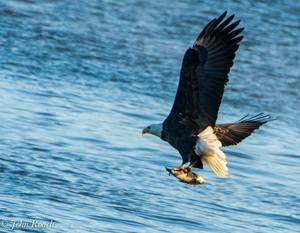 We all got together, bundled up to keep warm, and spent four hours shooting eagles and talking. It was a great day with plenty of eagle activity. Some of the eagles were coming so close that John was even shooting with a D700 and a 70-200mm lens for a while.

Below are links the posts about this get together in the wildlife forum. There is a group shot in the first link (just scroll down). The other links are images from shooting at L&D 14.