We have a free Nikonians cap waiting for a lucky Gold or Platinum member.
It's easy.
Just add your best photographic locations to our Good Locations Site in the Nikonians wiki and get the chance to win the cap. Entries made throughout the month of June will qualify.

You can download the free Good Locations app from the iTunes store. 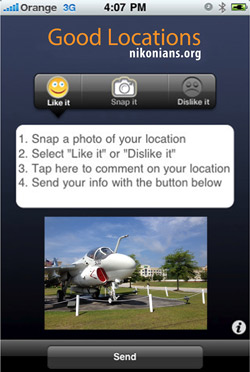 The latest version allows you to shoot your image while offline (or out of cell-phone range). You can capture the locations while being offline and then send them when you have network coverage.

Therefore, you can snap away regardless of available coverage (you would need GPS reception though) and then you can send the captured data at a later time. Make sure you download the latest version of the application to take advantage of this new feature.

Using the application, photographers can snap a location shot with their phone and upload the coordinates for future reference on shooting locations or for sharing with others.

As an example, the photo in this screenshot (at left) would also include specific directions via Google Maps to the shooting location in North Carolina.

Once you fill in your comments and press "send" your photo will quickly appear on our Good Locations Site. 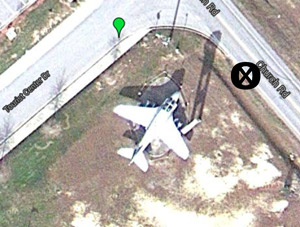 The Google map pin shows your location, but don't expect it to always pinpoint your exact shooting angle. We tested it recently and in our Google Map satellite view you can see the photographer's position compared to the exact position (marked with the circled-X).

This is probably due to the Google Map seeking the nearest street to add to the caption information. When we uploaded the image, our comments input included Highway 70 but never mentioned Tourist Center Drive. That addition was courtesy of Google.

Complete information can be found at our Good Locations by Nikonians Wiki, and before you start using it keep in mind the privacy precautions which apply not only to this application but any software program that publishes the exact location a photograph was taken.

The iPhone app Good Locations by Nikonians V1.0 was released January 21st 2010.
V1.01 was released February 2nd 2010. This release includes support for several languages and fixed a bug with ratings which are now sent properly.