The latest in Darrell Young's "Mastering" series books is ready for download.
The three eBook formats of Mastering the Nikon D500 are now available as a bundle from Rocky Nook.

The printed book will be shipping within the next few weeks.

Darrell's traditional method for sharing with the Nikonians community is to invite members to submit photos to be used as full page Chapter Opening images.

All members who have an image included in the book will receive a free copy of Mastering the Nikon D500 and be listed in a special Credits for Chapter Opening Images section of the book, with information mentioned under tech specs.

Congratulations to the following members who provided images chosen for use in this book: 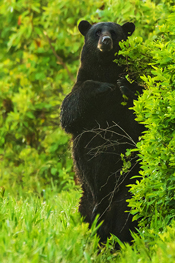 Sigma 150-600 f/5-6.3 DG OS HSM lens at 550mm, 1/800s at f/7.1, ISO 3200
The image was taken in Alligator River Park in NE North Carolina. The area has an abundance of black bears.
Many are quite shy, but this big boy was not disturbed by my presence and, in fact, walked ever closer until he stood straight up to scratch his back and then stared right at me.

What a privilege to be in his presence and what a gift to have a camera like the D500 that allowed me to capture many images hand held in early morning low light. 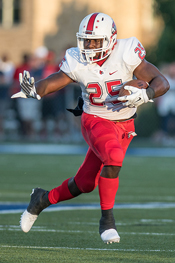 It caught my attention during post processing because it bears a striking resemblance to the pose of the Heisman Trophy, which is awarded yearly to the most outstanding player in college football. 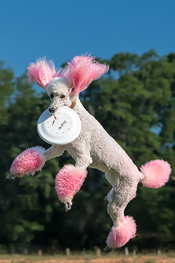 I used Manual Exposure Mode because the background composition changed rapidly although the light was constant. Using f/4 gave me shallow depth of field, and 1/1250s froze the action, allowing ISO 280 for correct exposure.

I used short bursts of 3-6 frames to capture the dog catching the disc. Jolene is a great subject.
The D500 was perfect for this kind of action due to the excellent AF, fast frame rate, and large buffer. I used a 64 GB Lexar 2933 XQD card to maximize speed. 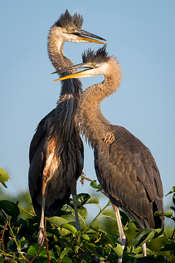 The sun was getting close to the horizon providing beautiful warm light, when I spotted this pair of nesting Blue Herons in a tree about 50 yards away. They had donned their mating plumage and were demonstrating their ritual "courtship dance."

The sun was behind me and the birds were beautifully lit-- their eyes were glowing yellow. I hand held the camera, focused on their eyes, and took a few bursts of shots. I was absolutely thrilled with the quality of this image. Even at ISO 10000, there was virtually no noise. 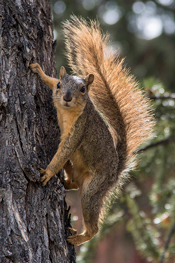 I was testing out my new D500 with my 24-120 f/4 lens and thought the numerous friendly Western Gray Squirrels on campus would make good wildlife test subjects for the D500.

This individual ran up the tree and I was attracted to the beautiful morning sun backlight on his tail and his intent look. 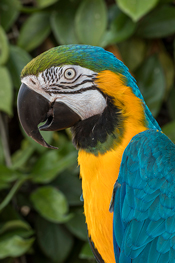 AF-S Nikkor 70-200mm f/2.8G ED VRII lens at 200mm, 1/30s at f/8, ISO 200
Our 25-year-old Blue and Gold macaw named Kiwi sits for a portrait in the backyard.
I placed him in open shade with a Hoya plant as background and used a RRS tripod and ball head owing to slow shutter speed.
Kiwi is naturally inquisitive and friendly and I just kept firing until I got a few shots I liked. 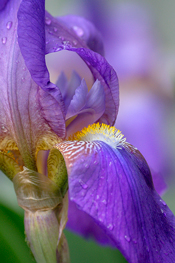 This photo was taken in a communal garden behind the home I was renting in Philadelphia in summer, 2016.

I was lucky enough to capture the flower in full bloom.

The Genus/species name of the flower is: Iris sibirica, commonly known as Siberian iris or Siberian flag. 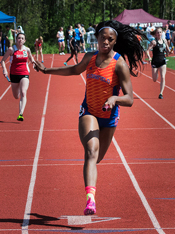 AF-S Nikkor Lens 80-400 f/4.5-5.6G at 98mm, 1/1250s at f/9, ISO 800
This was shot at the Greater Hartford Invitational Track and Field Meet held in Simsbury, CT.
This event was the Girls 4x100 relay. I was positioned at the end of the final straightaway and fired a burst as the winner approached the finish line.
The D500 nailed the focus on every shot in the 10 frame sequence. 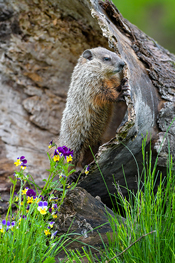 AF-S Nikkor 70-200/f2.8G ED VRII lens at 200mm, 1/400s at f4, ISO 1250, -1/3 EV
I captured this handsome woodchuck near my Minnesota home as he paused briefly outside his hollow log den on a hot, overcast June day.
I put the D500 through its paces that weekend and this image shows that the D500's sensor performs very well at higher ISO's.
The color rendition is very good, easily besting its predecessor, the D300. 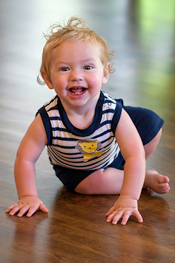 The D500's white balance nailed the color in the shot, making it very easy to capture an image with correct skin tones. 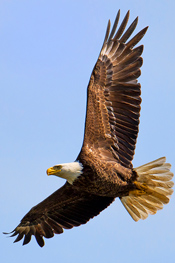 The "Dam" is well known worldwide not only the resident Bald Eagles but also for the fall/winter influx of the many birds that migrate here each year.

The prime time for photographing eagles here is usually around Thanksgiving; however, this shot was taken on April 25th. The D500's autofocus tracking during continuous high speed shooting has drastically improved my success rate. 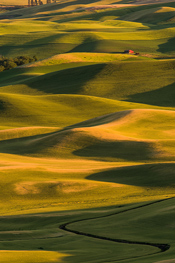 Nikon 70-200 F2.8 with 1.4X TC at 280mm, 1/25s at f/8, ISO 360
In eastern Washington state right on the Idaho border there are some amazing agricultural areas full of rolling hills called the Palouse Country.
The hills "come alive" in very early or very late light. I took this picture during the transition of the wheat fields from green to gold in mid-summer.
There are a few elevated areas where you can see these great vistas. Even though the photo is a scenic, I utilized my 70-200 with a 1.4X to really compress the vast distance you are seeing. 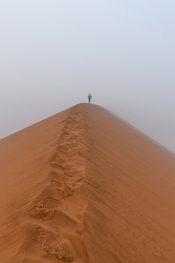 We were the first ones up the dune and that made for some difficult hiking.

It was a cold morning and we were initially disappointed to not have the sun, but the fog made for much more interesting photos.

TrackBack URL for this entry:
https://blog.nikonians.org/c/mt-tb.cgi/2652